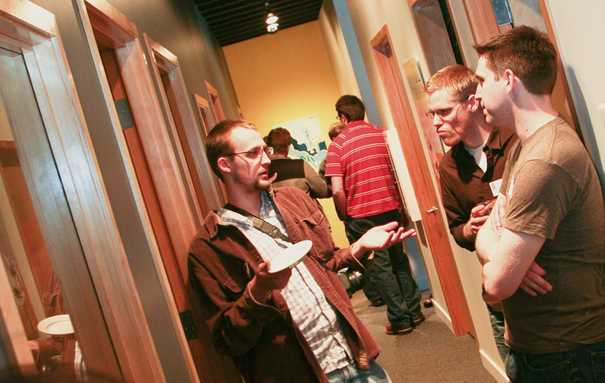 Nate Vander Wilt is the diversely talented web and desktop developer who makes the sixth employee added to &yet over the last year. We got to know Nate primarily on Twitter, believe it or not.

Nate's a midwest transplant currently living on a semi-dusty gravel road in the bustling city of Outlook, WA.

Before joining &yet, Nate ran Mac and iPhone software company Calf Trail and worked as a contractor, developing custom web mapping solutions for clients like the National Weather Service.

Today I officially accepted a full-time job as “Web Application Developer and GIS ExpertJourneyman” — employee number seven — at &yet.

Since meeting &yet (when it was just Adam Brault) a little over a year ago, it’s moved in my regard from “cool local website company” to “top-notch team” to “dream employer”.

To be honest, though, the job offer was mostly unexpected and I’m still adjusting to the task of becoming “dream employee” instead of an independent contractor. Writing shareware for Calf Trail was a chance to explore all my ideals. Especially the one about money not being important.

Working with &yet is about combining diverse talents and perspectives into one team that shares responsibility for breadwinning — and fantasticmaking, of course.

I’m deeply grateful that I’ve been led to and then given this opportunity. While desktop software still interests me as a hobby, times were shifting and I’d already chosen the open web over giving 30% ownership of my livelihood to a corporation who squish liberty like bug. Joining &yet mostly means a much greater chance of success in this next stage of life.

We’re still working out the details, but the basic gist is that I will be moving all my paid geo, web and technical writing services to &yet. Calf Trail will remain, for the time being anyway, but mostly as a home for some desktop and photo management experiments. (More about that later, and I’ll be posting the official “Calf Trail” plan on the company blog when Calf Trail has an official plan.)

P.S. Nate isn't the only person that &yet hired because of Twitter...

Henrik has a really nice recounting of his hiring process up on his blog. (We added Henrik Joreteg to the team in February after recruiting him out of Southern California.)

It's especially hilarious that he nearly unfollowed Adam for being too random.

He wouldn't have been the first.