A rare re-post of our latest &you newsletter 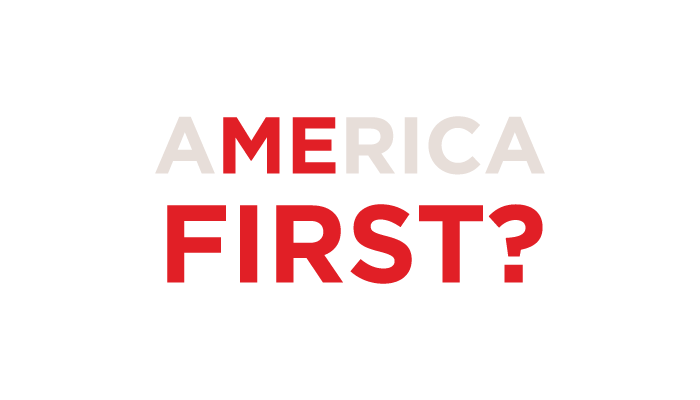 This newsletter’s theme was supposed to be finding your place, inspired by Sarah’s move across the country. We likely would have shared something about the definition of “the good life” given by one of our heroes, Cheryl Broetje: living in the place you belong, with the people you love, doing the work that’s yours—on purpose.

But our team felt it would be extremely poor taste to talk about finding your place when our president has taken actions which fly in the face of our nation’s most foundational ideals, well described by the poem on the Statue of Liberty:

“Give me your tired, your poor, Your huddled masses yearning to breathe free, The wretched refuse of your teeming shore. Send these, the homeless, tempest-tost to me, I lift my lamp beside the golden door!”

When it comes to political discussions, the advice to businesses sounds like the words of Hamilton’s fictionalized Aaron Burr: “Talk less. Smile more. Don’t let them know what you’re against or what you’re for.” I made a commitment after the election to being a better person and a better citizen and to making &yet a better company. I am spending this year seeking the answer to the question: “Who will &yet be for the next 10 years?” One thing I know I do not want us to be is silent.

It’s been a hard week for anyone who believes in who the USA can be based on the bold, aspirational vision of a land where all people are equal, where immigrants are welcomed with open arms, where no one religion rules the land, where the government serves and answers to the people—a vision we’ve still not lived up to, but which we’ve seen take two steps forward and one step back for two-plus centuries.

The slogan for the current presidential administration is “America First.” It sure sounds patriotic, but many feared what it might mean on a policy level: xenophobia and anti-immigration, putting profit ahead of people, instructing the world to be submissive to our power and to bear the consequences of our endless appetite. It’s not about the aspirational ideals and values of America at all. “America First” might be more accurately described as “me first.”

Just a few days into this presidency, this fear hasn’t proven unfounded. I have found myself so disturbed and emotionally raw by the state of our nation, I disabled all my social media accounts. Being inundated with an overwhelming flood of terrible news was making me feel ashamed, overwhelmed, and powerless. I needed to recover and focus on what I could do.

The most recent moves by this administration regarding immigrants and refugees have been so hard to stomach. I am overwhelmed with grief when I look at our world’s refugee crisis through the photographer’s lens. It doesn’t take more than a couple photos to feel a sense of the desperation and hopelessness that’s well-expressed by the Somali poet Warsan Shire: “No one leaves home unless home is the mouth of a shark.”

In 1977, the Voyager spacecraft set out to travel deep into space. Today, it has passed the edge of our solar system. The message it contains is a powerful one:

This Voyager spacecraft was constructed by the United States of America. We are a community of 240 million human beings among the more than 4 billion who inhabit the planet Earth. We human beings are still divided into nation states, but these states are rapidly becoming a single global civilization.

We cast this message into the cosmos. It is likely to survive a billion years into our future, when our civilization is profoundly altered and the surface of the Earth may be vastly changed. Of the 200 billion stars in the Milky Way galaxy, some--perhaps many--may have inhabited planets and spacefaring civilizations. If one such civilization intercepts Voyager and can understand these recorded contents, here is our message:

This is a present from a small distant world, a token of our sounds, our science, our images, our music, our thoughts, and our feelings. We are attempting to survive our time so we may live into yours. We hope someday, having solved the problems we face, to join a community of galactic civilizations. This record represents our hope and our determination, and our good will in a vast and awesome universe.

Forty years later, it feels like we are moving in the opposite direction of this vision. Yet there is reason for hope.

We live in a nation that holds some very idealistic values. We have never fully lived out those values and we have certainly never been perfect—far from it, in fact. We displaced a massive native population. We were founded by people who owned people. We’ve been led by people who slaughtered natives and created our own refugee crisis. We unjustly imprisoned people for their race. We’ve fought wars over wealth and resources and “our (comfortable) way of life.” But no matter what we’ve done, our commitment to our ideals has drawn us forward.

This past December, Amy made our team new hoodies. Our old ones have an ampersand on the breast and say “&yetis” on the back. We were trying to determine what to put on the back but ultimately went with our core value: “People first.” 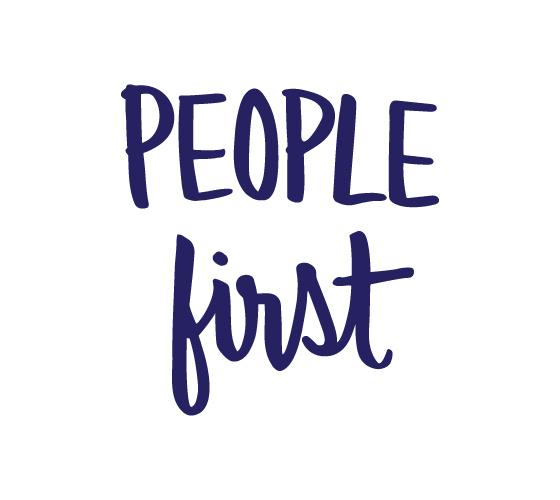 For us, this phrase usually is a statement about the importance of individual people being more valuable than ideas or profit or plans.

But since the inauguration, every time I have put on this sweatshirt, I have done so as a protest against the broken mentality of “America First.” I think we can do better than a small-minded, selfish view of the world that prioritizes one kind of people over another.

It’s so easy to point fingers and assign blame in politics. Laying it all at the feet of our new president is a cop-out. I’m complicit, too. Our consumeristic view of politics means that we get to abdicate responsibility when someone is in power who we feel matches our worldview.

The 10,000 refugees the Obama administration said they were going to let in is nearly as shameful, in some ways. We kept the crack of hope open wide enough to say we weren’t completely abandoning our values. It upset me deeply that we weren’t doing more, and I expressed that, but I’m embarrassed to say I moved on.

When it comes to the Syrian refugee crisis, it’s been comfortable to let someone else drive, feeling like the US was going to head in the right direction while we sat by. We were wrong. Doing that is a big part of what got us to today. But, as our colleague Gar once said, “The best thing about being wrong is you get to be right again.”

We each look at photos of refugees and ache. The world should be better. Like you, we believe it’s possible. But probably also like you, we have found it so easy to feel powerless these days.

And yet we are not powerless—not by a long shot.

No one can stop us from making things better than they are right now. And resigning ourselves to powerlessness undermines the most fundamental truth that our government serves the people.

The current administration has given us a wake-up call to how fully we’ve abdicated our power as citizens. The new president said in his inauguration speech his goal was to restore power to the American people. Ironically, he may be correct in that as the ultimate outcome.

Years ago, I heard Substack say something that hit me deeply. He was describing the tiny modules philosophy that is a core tenet of Node architecture and said: “Tiny modules build on other tiny modules to make tiny powerful high level abstractions.” I realized the same applies to people—and that this same sentiment summed up what I believe about leadership, collaboration, and communities:

Our world needs tiny people like us, tiny companies like ours, and the people we are surrounded by to add our voices and our hands to leading our society. We need leaders who constantly make room for more leaders—not fewer. We need you.

In the immortal words of Tina Turner, “we don’t need another hero.” No, our world needs entire armies of leaders. And we need to believe that’s not just enough—it’s the most powerful force on earth.

Aziz Ansari nailed it: “If you look at our country’s history, change doesn’t come from presidents. Change comes from large groups of angry people—and if day one is any indication, you are part of the largest group of angry people I have ever seen.”

It’s so easy to feel cowed by the sheer force of power, but Jenn pointed to this thread illustrating the many ways engaged people have already had an impact.

David Foster Wallace said that real leaders are people who “help us overcome the limitations of our own individual laziness and selfishness and weakness and fear and get us to do better, harder things than we can get ourselves to do on our own.”

We need to do exactly that—for each other.

The world should be better. Like you, we believe it’s possible—together.

So here’s to you—wherever you are and however you’re fighting for truth, justice, and the real American way: not “America First,” not “me first,” but “People first.”

P.S. We might have to order some more hoodies. ;) In fact—we are!

You can pre-order a super-soft “People first” hoodie here for $48 + shipping. We’re donating 100% of the profits to the ACLU—at least $15 from each hoodie). 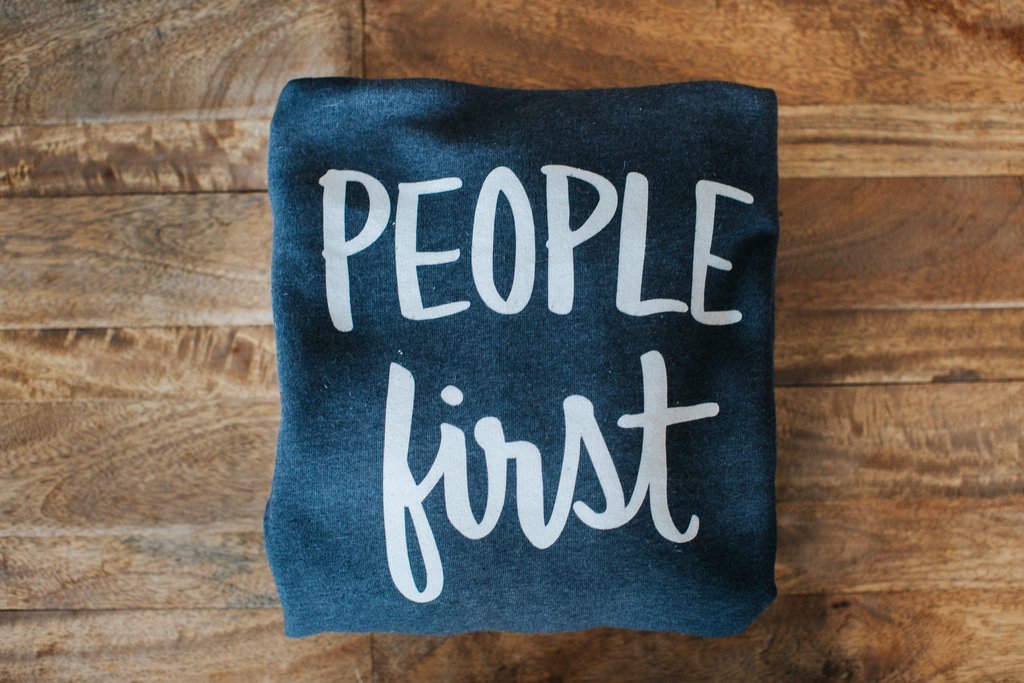