Behind the scenes: a remote holiday party 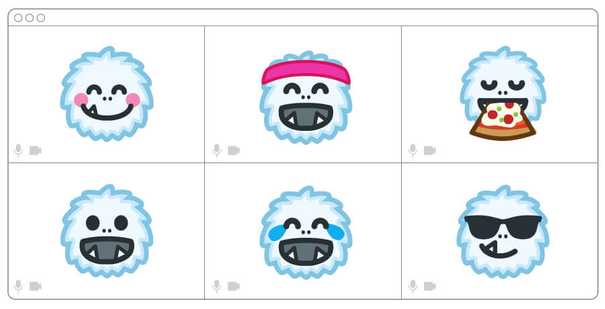 &yet has been remote-friendly for a long time, but right now we’re the most remote we’ve ever been. We have team members in Seattle, Portland, Folsom, Phoenix, Pennsylvania, and Germany. The folks in Tri-Cities, Washington (a sort of “HQ”) work remotely too from co-working spaces, coffee shops, and home offices.

We love gathering together, but sometimes it’s just not an option. So this past December we decided to try an all-remote holiday party. Some activities worked really well and others not as much. Here’s a rundown of what we did!

We all gathered in a video call to chat and hang out while we added items to a Recommendations doc: a big list of some of our favorite books, movies, tv shows, podcasts, food, and drinks. So many things to read and try! We shared the recommendations on the blog earlier this week if you want to see the things we’ve been excited about.

A group of elves in Tri-Cities put together some holiday boxes for everyone on the team. The boxes were shipped to everyone and we all opened them together on our video call. They were amazing! Inside the boxes were a custom designed t-shirt, hoodie, pint glasses, and stickers by people on the team. There were plenty of snacks, candy, and beverages (including some sparkling cider for a toast). Every person got a personalized limerick and toys and books hand-chosen for them.

A sample of limericks (crafted by Adam):

Amy has skills your design covets.
If you ask for her critique of its,
She’s likely to say
It’s nice or okay.
But beware of “I don’t really love it”s.

We all know a Nathan named Fritzy.
His way with architecture’s so glitzy.
If we had the need,
He’d slam code with speed.
Thank God his carpals still have some menisci!

Here are a few pics of the unboxing:

And a full view of box contents: 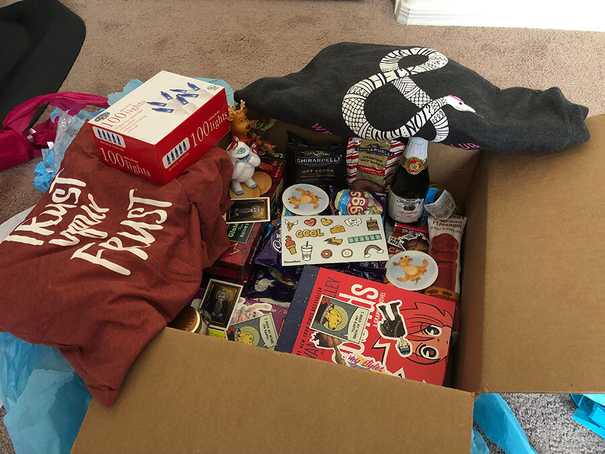 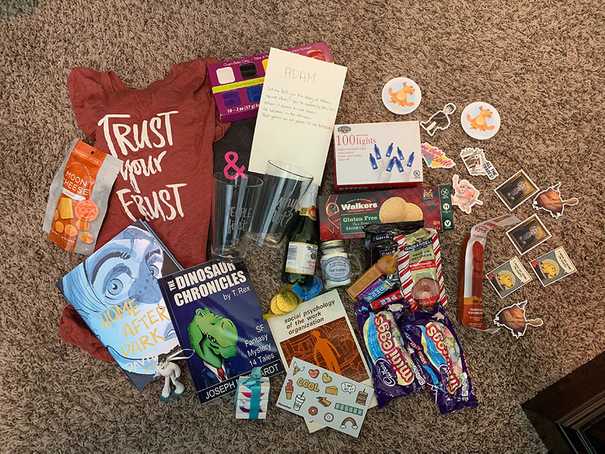 All the hand-chosen toys and books for everyone on the team: 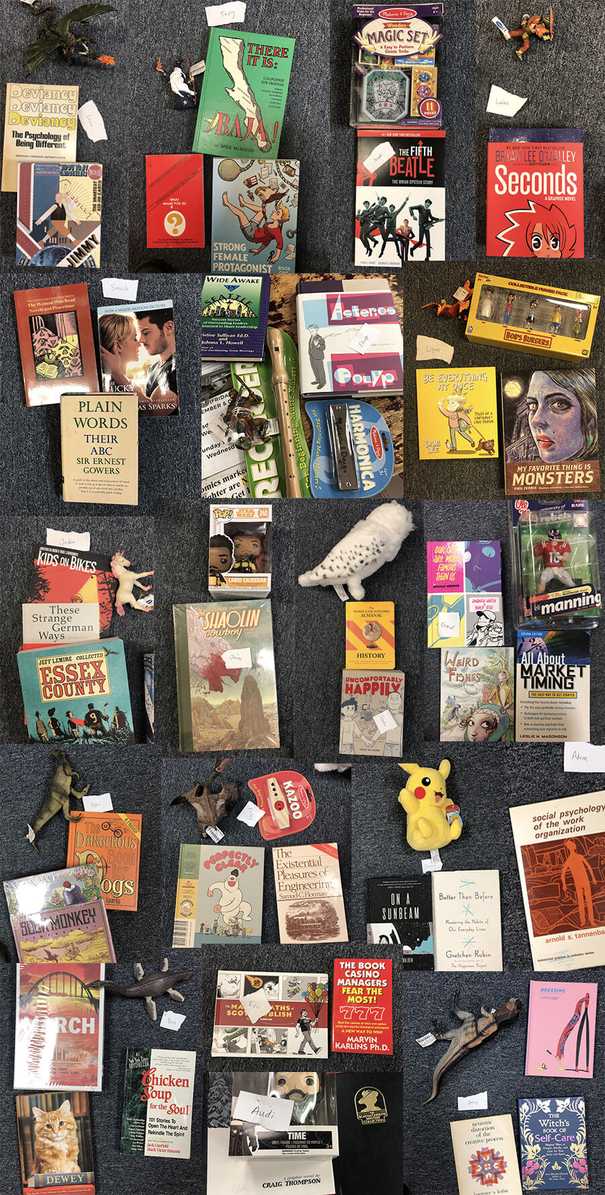 This was a really special activity and we already have some fun ideas for the next time we do it.

We popped open the sparkling cider in our gift boxes to give a round of toasts. One of my very favorite activities &yet does is going around the group giving toasts on special occasions. They’re always entertaining, heartfelt, and we make sure to get to everyone, no matter how long it takes.

It’s an opportunity to share personal wins, things that were hard for us over the year, to express gratitude, and to extend high-fives to our teammates.

After toasts we broke up into groups and played Stardew Valley together. Some people were experienced Stardew-ers and some were novices (me, I had no idea what was going on). It was especially hilarious hearing people’s confused commentary. “Wait, it’s time to sleep? There’s someone in the bed already!”

This was also a good point in the day for people to step away and take a break. Being present on a group video call can take a lot of energy and some people snuck away for a nap. We’re pro nap-taking, for sure.

The next part might be the most important. As much as was possible, everyone on the team got their favorite pizza delivered to their house for lunch. I did some pre-party sleuthing, asking everyone about their fave pizza where they live. Adam correctly assumed that pizza questions coming from me would seem less suspicious. With the help of food delivery services and some friends willing to help out, we all chowed down on some delicious pizza.

Also we forgot about time zones, so we weren’t all eating at exactly the same time. But close! 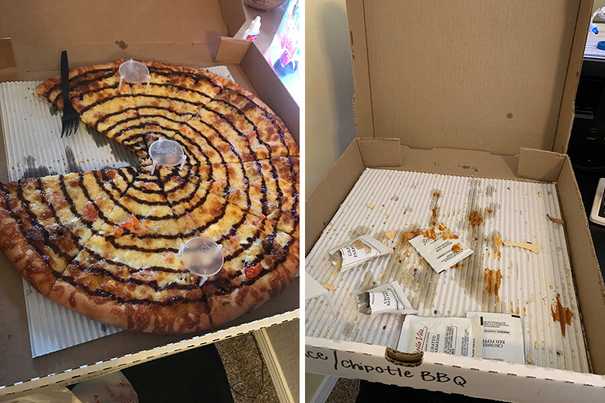 Not much evidence of the pizza. Too busy eating.

Inside our holiday boxes was some assorted-colors Sculpey modeling clay. Sarah’s daughter Lilah gave us a quick tutorial on creating mini clay sculptures and challenged us to create our own. Some beautiful Sculpey creations were shared (see below) and Lilah judged them and handed out awards. Overall winner was Terry with her wizard (“You’re a wizard, Terry!”). Some other notable awards were “Most Delicious”, “Fastest”, and “Most Fingerprints.” 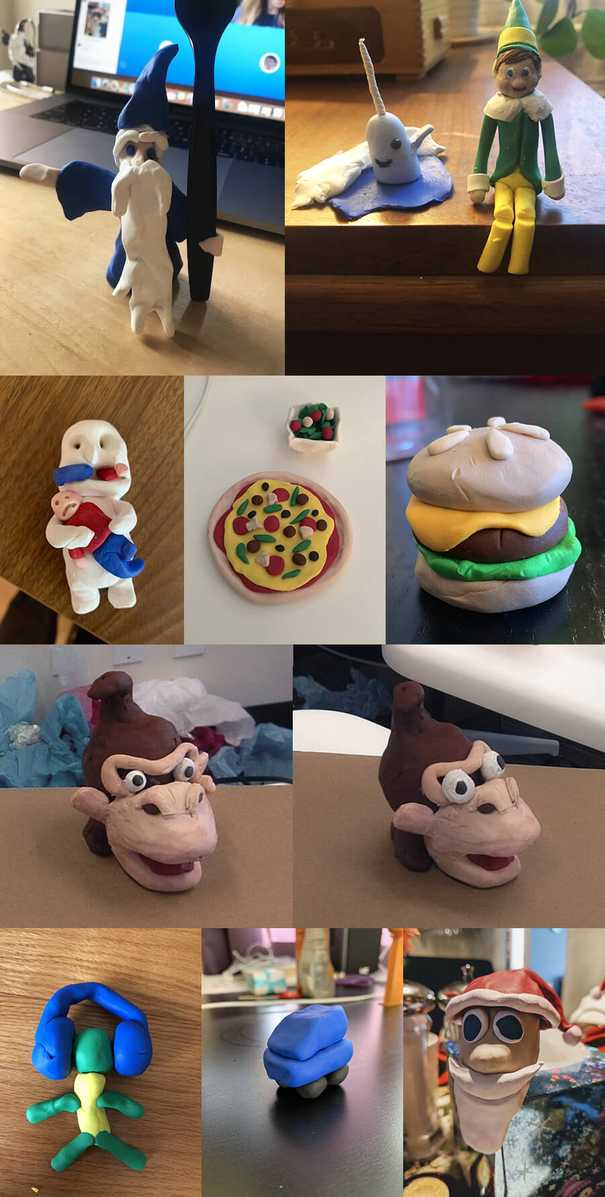 ✏️ Try to play a game of Telestrations, but… don’t

Telestrations is a group game that’s a mix of Telephone and Pictionary and it’s hilarious. We’ve played it in person together and hoped we could replicate that experience remotely. We tried an app called Drawception but it didn’t quite work how we were expecting. After some “Does this work for you?” back and forths, we gave up. But! It did give us an idea of how we could prepare better and try again next time.

Another holiday tradition we tried remotely was a White Elephant gift exchange (Yankee Swap, as it’s known to some). It was a little make-shift with us using a combination video call, Slack, and a Paper doc. All the participants selected a $20 gift in advance. We drew names to assign the selection order. If someone chose your gift, you pasted the URL to the gift in Slack. Then we tracked everything in Paper and selecting / stealing gifts continued.

We lost a little bit of the anonymity that an in-person gift exchange provides, but pasting the gift URLs was still a really fun reveal. And stealing was still as merciless as ever. At the end we ordered and shipped the gifts to the recipient.

A few of the gifts that showed up in the exchange were a Funko Pop of Bob Ross, a Golden Girls puzzle, a Star Trek cats calendar, a sloth hanging planter, a pizza beach blanket, a Han Solo cutting board, a Jon Kitna autographed football card, a handful of board games, and a book about mushrooms with the best cover ever. 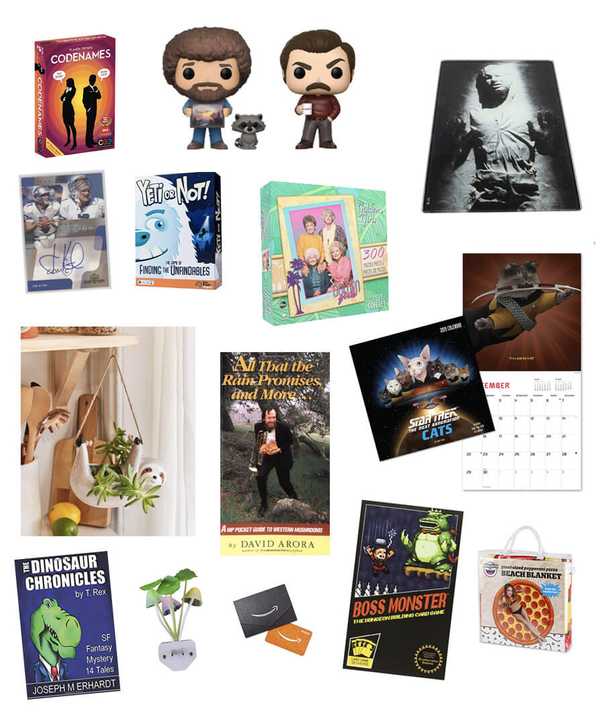 To end the day, we voted on a movie to watch together in rabb.it. We landed on The Hitchhiker’s Guide to the Galaxy. A handful of us made it to the end and it was a good way to relax and start our winter break.

Some other ideas we had that we might try for another party in the future:

Have you ever tried out a remote gathering? What worked for you? We’d love to hear!