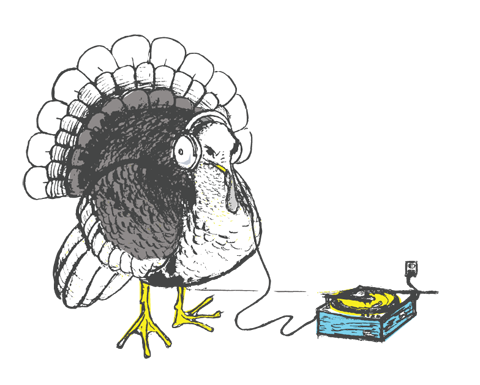 Six years ago, around this time of year, I met this turkey for the first time.

It was on a flyer for a little local music venue called The Red Room that had received quite a bit of acclaim. I'd heard of the venue, but hadn't been there yet. I hadn't met anyone who'd been to it yet, so somehow it wasn't really real.

The flyer sat on the counter of a tiny print shop on the far side of Pasco. I say "shop," but this was a warehouse. I could hear the giant analog four-color press churning out Spanish-language phone books, going "chkunk-shhhh-chkunk-shhhh-chkunk!" faster than I could possibly onomatopoeticate.

I had shown up to print the first brochure for a little business I'd started haphazardly.

The brochure was in RGB color—gasp!—and not print standard CMYK. I'm glad I didn't tie my personal pride to my print design because this was apparently like showing up to a hockey game with figure skates (but I don't know anything about hockey either though, so...).

I stood awkwardly at the counter while the very friendly young woman swiped and clicked away at the iMac across the room, recoloring my entire brochure for free.

I held up the flyer with the turkey on it. "Have you ever been to this place?" I asked her.

"Oh yeah. I help run it! :)" Apparently the only person in the world who speaks with audible smileyface emoticons.

"These flyers are really cool. Who did the design and artwork for them?" I asked.

"Do you know Python? Do you know anyone locally who does?" I DM'd to Brian Manley, one of the few local nerds I knew on Twitter in 2008.

"Nope. @fritzy does," came the reply.

After years writing PHP and hacking things together with jQuery, I decided I wanted to get into more development. I'd been doing a few small projects with Rails, and I was intrigued by Django. But I needed a Python primer and someone I could ask when I got snowed in by a stacktrace.

I reached out to Fritzy, and soon realized I knew him from junior high.

I hung out with him for a bit, got some good pointers. I met his wife, Athena, and his cute kids: a very talkative and adorable Sam and a tiny Eileen.

Fritzy told me he had a minuscule office and extra space to rent. It was 10' by 12' but I was happy to squeeze in among Nathan and an intimidating man who went by the name "Gar."

Not long after, I got the most random email ever from some security guy who was a friend of theirs. Apparently my contact form CAPTCHA was insecure. I didn't really care about that, but until that moment, I had never thought about security.

A couple days later, this random guy shows up in the office while I'm alone and startles me half to death. "Hahahaha," he laughed at my sheet-white expression. "I'm Adam—I'm the guy who sent you the email about your contact form."

Figures it'd be the security guy scaring the crap out of me.

Time passed and I got an IM out of the blue. "I have this crazy idea," said Fritzy's IM avatar. "What if you hired me and &yet became a software company?"

"Hey! I just saw you're from the Tri-Cities. I'm going to be up there in a couple weeks."

Out of nowhere came an unexpectedly friendly DM from this very serious looking (German?) guy who had randomly followed me at some point. All I knew was he did Django and had a weird name. ("Hendrick"? Is that Swiss? And why does he look so intense?) 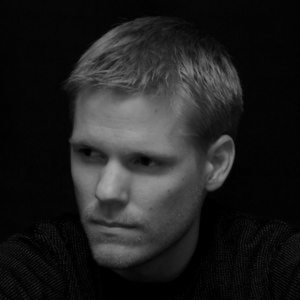 We talked for a bit and decided to get Thai food when he was in town.

That conversation went surprisingly great—especially given that he had only followed me by chance and it was by even greater chance he DM'd me (he was about to unfollow me because he thought I was super weird on Twitter, but when he clicked my profile, he realized he was going to be in my area, so he DM'd me instead).

We talked for almost two hours about all kinds of things. It became clear we shared a lot of the same perspective on business, tech, and valuing people.

The whole time, I sat there thinking, "I really wish this Henrik guy lived up here and I got to work with him." And then I thought, "How the hell do you say his last name again?"

I could go on.

I could tell you about the first sushi lunch I had with Eric, or Thai with a contemplative Stephanie asking, "should I expect more meaning out of my job?" or the magic of meeting Luke because of Lynn and Lynn because of Luke.

I could talk about getting introduced to Karolina by Jan, of Jenn's certain destiny to be part of our team, the serendipity of a week spent with Jaime, or how the only reason I know Mike is because he asked a group I was in to watch his stuff while he used the restroom at a coffee shop. Or how the only reason Ljon works here is because I was looking to meet a chef.

On and on I could go, indeed.

These are just stories to most of you.

But they all make me well up with gratitude when I look back on them.

Who was I to come along the paths of these remarkable, wonderful people who would shape my life so profoundly? People who would teach me my own value, and help me learn what it is to be part of a team.

Even if &yet was shuttered and gone tomorrow, these people have marked me so deeply, I'd still have to spend the rest of my life to express the gratitude I feel for them.

I will never cease being grateful for the many chance encounters I've had that have led me to today. Through seasons of heartache and joy, I'm grateful for every single person I have ever worked with and I will continue to be.

I am a lucky bastard—Thanksgiving is my favorite holiday.

Yes. These are just stories.

But you have your own stories.

Stop today. Look around at the people in your life and remember how they got there.

Whether we have everything or we have nothing, we always have the people in our lives.

I hope that, when you do, your spirit wells up with gratitude for these people—and perhaps for the emails, CAPCHTAS, DMs, and maybe even serendipitous turkeys that brought you together.